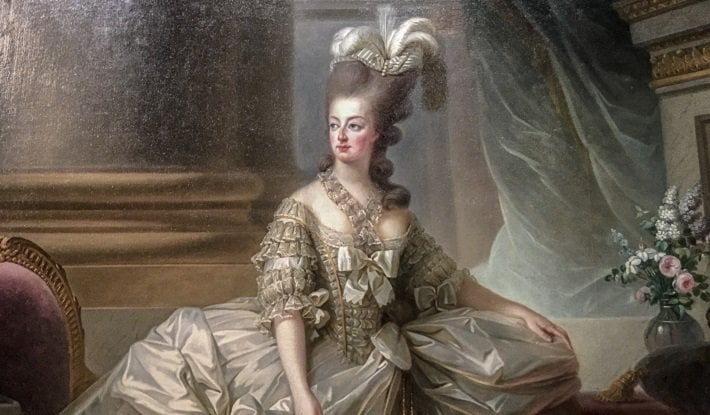 Who was Marie Antoinette?

Marie Antoinette was born Maria Antonia Josepha Johanna in Vienna, Austria, in 1755. She was born into Royalty as the daughter of Empress Marie Theresa and Francis I, the Holy Roman Emperor, who together ruled over the Hapsburg Empire.

Soon after her birth, from the years 1756-1763, the Hapsburgs found themselves embroiled in the Seven Years' War, which raged across the entire five continents and left Europe divided.

Following the war, in an attempt to ally with France, it was agreed that Maria, aged just 14, would be married to Louis-Auguste, the grandson of the French ruler, King Louis XV.

The young couple were married by proxy in April 1770; at the time of their marriage they had never even met!

Following the marriage, Maria travelled to France with a vast procession of 57 carriages, 117 footmen and 376 horsemen and her name was changed in favour of a more French-sounding moniker. 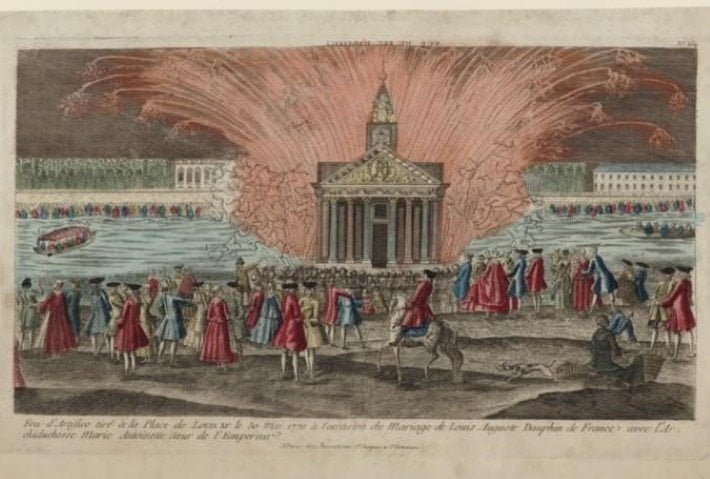 The decadent firework display at the wedding of Marie Antoinette and Louis XVI in May 1774, by Basset.  © Gallica/Bibliotheque Nationale de France via Wikimedia Commons

Following extensive wedding celebrations in May 1770, Marie Antoinette began to settle into the French court.

Whilst she was reluctant to embrace the very public, formal role that the French Royal family had, she quickly adopted their penchant for fashion, excess and luxury.

After the death of his grandfather Louis XV in 1774, Louis-Auguste became King Louis XVI of France, and, as his wife, Marie Antoinette became Queen.

The Royals lived in the monumental Palace of Versailles, which had been the seat of the French monarchy since the 17th Century.

The Palace was also the centre of French fashion – in clothing, furniture and interiors; everyone looked to Versailles for the latest trends and finest decorations.

At Versailles, Marie Antoinette devoted her time, attention and considerable expense to planning her wardrobe and hairstyles and the parties at which to show them off. She would commission as many as 300 dresses a year, and reportedly never wore anything twice.

She also spent considerable time, effort and expense decorating and redecorating her numerous apartments in Versailles, and the way in which she decorated her interiors became an extension of the way that she dressed herself.

It is in these areas – of fashion and design – where Marie Antoinette left a lasting legacy. Her dedication to perfection and her delight in pure luxury, with a distinctive feminine touch, continues to inspire even today.

However, this legacy also contributed to her own downfall and that of the French Monarchy.

In a country that was mired in debt, and with citizens starving on the streets, the Royals' excesses would ultimately lead to the French Revolution, which would cost both King Louis XVI and Queen Marie Antoinette their lives.

What is Marie Antoinette famous for and why is she important?

Marie Antoinette wholeheartedly embraced the fun side of being part of the French Royal Family and the creative freedom that she could enjoy.

Her passion for clothing, decorating and interiors, together with a seemingly limitless budget, allowed her to create the masterpieces that inspire to the modern day and left a significant legacy to the histories of fashion and interior design.

Marie Antoinette was a true style icon of her time and her latest trends would influence France and Europe, in much the same way that young Royals such as Kate Middleton and Meghan Markle do today.

Whilst the style of the period in France is commonly referred to as Louis XVI style, which itself takes inspiration from Neoclassicism sweeping across Europe, much of the creative inspiration came from Queen Marie Antoinette, rather than her husband.

Marie Antoinette has become renowned for her highly cultivated taste for fashion and interiors, and this forms one of her most significant achievements as Queen.

Queen Marie Antoinette is perhaps, however, most famous for something which probably never happened.

“Let them eat cake” is her supposed response to hearing about the bread shortage, which had led to rioting across France.

While it has been proven highly improbable that she really said this, the phrase does accurately summarise the attitude and ignorance of the monarchy toward the public, many of whom were struggling to feed themselves during a period of severe economic hardship.

Marie Antoinette’s extensive penchant for luxury and excess is perhaps therefore as significant for contributing toward the uprising of the French Revolution, as it is for its innovation and beauty, and the legacy that it leaves.

What was Marie Antoinette's influence on fashion?

Marie Antoinette is often described as the first consumer of ‘haute couture’ fashion – one-of-a-kind pieces designed and made to measure for her by her ‘Minister of Fashion’ Rose Bertin.

Thanks to her skills and her spendthrift Royal client, Bertin became the first famous ‘fashion designer’, and her creations would inspire a nation.

Marie Antoinette's fashion masterpieces included costumes of extreme extravagance for court appearances. She was the first young and fashionable Queen in three generations to hold the public absolutely captivated by what voluminous, heavily decorated creation she would wear next.

She was also looked to for her tall and intensely adorned hairstyles, which were called ‘poufs’ and were halfway between a hat and a hair arrangement.

Poufs would often reference events of pop-culture or political significance of the day. They would include relevant emblems interlaced within the hair design, often with drawings and written text or motifs. 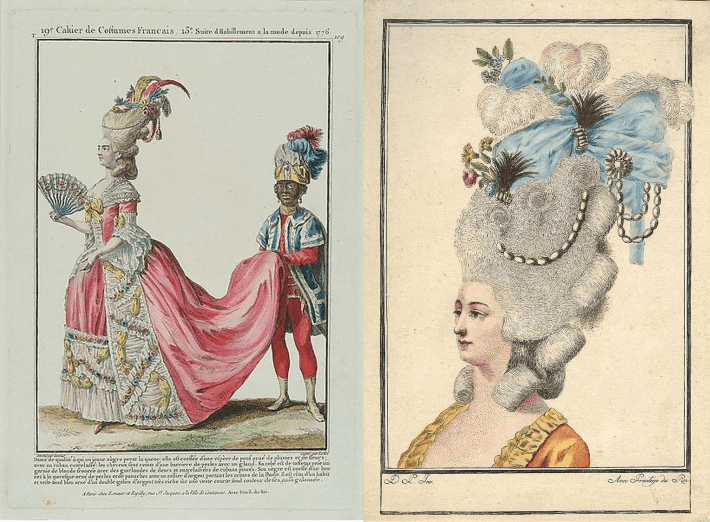 For more casual wear with friends away from the court, Marie Antoinette favoured rustic and simple muslin gowns in whites and pastel colours, which also set new trends.

For the first time in history, Marie Antoinette, together with Rose Bertin, elevated fashion and clothes from a trade to an artform.

Fashion has moved on since the days of Marie Antoinette, and whilst we no longer attempt to dress like her day-to-day, the concept of 'celebrity style', influencing and imitated by society at large, is as strong now as ever.

What was Marie Antoinette’s influence on interior design?

Marie Antoinette decorated her interiors around the same principles that one would use when choosing an outfit – or at least an 18th Century outfit, taking the care and attention in every detail and ensuring a perfect 'fit'.

Marie Antoinette's first major design project was the Petit Trianon – a ‘folly’ in the grounds of Versailles – which Louis XVI gave his wife as a wedding present. Marie Antoinette fell in love with her new project and set about redecorating it. She would spend weeks on end staying there, eschewing her royal duties in favour of an intimate, informal setting away from the very public life at Versailles.

She went as far as having a toy farm built and spent a great deal of attention on the gardens, which she brought inside with floral decorations, which became an important design element of Marie Antoinette's interiors.

Wooden panelling was incorporated throughout and the walls were further decorated with ‘boiserie’ work – fine, wooden carvings, usually in the form of flowers, arabesques and Classically inspired motifs, such as masks, urns and laurel leaves.

The carving on the panels would occasionally be gilded, but Marie Antoinette's style is perhaps epitomized in her Boudoir at the Petit Trianon (below), which was decorated with white carvings on a baby blue background.

Marie Antoinette’s Boudoir at the Petit Trianon. Notice how the chairs share designs with the wooden panelling. ©Starus via Wikimedia Commons

The Boudoir was decorated by the Rousseau brothers, who were employed by the Queen to decorate many of her apartments in different palaces.

The Salon, a room at the Petit Trianon where Marie Antoinette would entertain, is again decorated in typical fashion. The panelled walls incorporate a two tone colour scheme of pale green and white, with all of the textiles matching in fuschia throughout. The decor with floral motif detailing is consistently applied across all furnishings and architectural features.

The Salon at the Petit Trianon. © Jorge Lascar via Wikimedia Commons

As well as the Petit Trianon, Marie Antoinette decorated extensively within her apartments at Versailles itself. There, her interiors were grander, befitting the nature of a royal court. But, she still put her touch on the interiors, incorporating floral detailing and refined wooden boiserie panelling, as seen in the State Bedchamber (below).

Whilst Marie Antoinette might have enjoyed some of her interiors fresh and unfettered by intense, dark colours, her taste for pure luxury is demonstrated by the boudoir that was created for her by the aformentioned Rousseau brothers at the Chateau of Fontainebleau.

Rivalling her State Bedchamber at Versailles, the entire room is gilded and silvered to wondrous effect. Nevertheless, the characteristics of the Petit Trianon can still be felt in the wooden panelling, the arabesque designs and the Classical motifs.

Boudoir of the Queen at the Chateau of Fontainebleau. © Davidh820 via Wikimedia Commons

What was Marie Antoinette’s influence on furniture?

The legs on pieces of furniture made for her were inspired by columns and would often have inward tapering fluting. Friezes, pilasters and pediments were incorporated into furniture design.

Desk made for Marie Antoinette by Jean Henri Riesener in 1783, which is in the Cabinet d’Ore at Versailles. Note the tapered, column legs and frieze in ormolu around the tabletop.

Many pieces of furniture made for Marie Antoinette were mounted with ormolu, which would often mirror the designs of the boiserie on the walls.

Floral marquetry with bows and parquetry in a diamond pattern were also defining features in furniture, which was crafted symmetrically.

Marie Antoinette had the very best of everything, and she called upon the most important cabinetmaker of the period Jean Henri Riesener to make bespoke pieces for her.

At the Louvre Museum in Paris, the ‘Salle Marie Antoinette’ displays a range of Riesener furniture, among other makers, and features many of the design features that are typically associated with Marie Antoinette.

Whilst the room does not follow a singular colour scheme, the chairs bordering the walls match the wallpaper, and flowers, as ever, are a recurring theme.

What is the influence of Marie Antoinette today?

While Marie Antoinette’s life might have been cut prematurely short, her style lives on and is constantly recreated and enjoyed.

By royal association and its soft, feminine appearance, her style has connotations of a distinctly sophisticated ‘Frenchness’.

With the added appeal of a young, fashionable queen, Marie Antoinette has influenced modern interior design extensively. There are even whole design companies that revolve around the demand for Marie Antoinette inspired interiors.

The phenomenon of Marie Antoinette as the first true consumer of ‘haute couture’ clothing, together with her lavishness, and the sensation that her extravagance caused at the time, means that Marie Antoinette has a cult status in history, art history and fashion history.

Testimony to her legacy are the many rooms at the Petit Trianon, at Versailles and at the Chateau of Fontainebleau that have been recreated or even remain with the original decorations she had designed, and the millions of visitors they attract each year.

Quite simply unique, and ever imitated, Marie Antoinette and her famous styles will continue to inspire as long as her legacy survives.

We hope you enjoyed this latest post on Marie Antoinette and her royal interiors and fashion! Please, do share this with your friends using the buttons below. If there is something you would love to read about, from art to designers to history and fashion, do get in touch with us! Until next time, mes amis.

As well as fashion and interiors, Marie Antoinette was a great lover of theatre - so much so that she had one built for herself! And, of course, she took on the starring roles in the productions that she put on with friends.