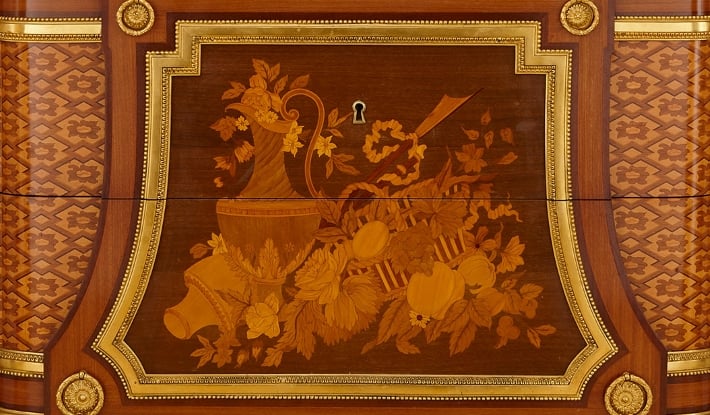 What are marquetry and parquetry?

Marquetry and parquetry are decorative techniques in woodwork that are used to create flat ornamental designs in furniture, objects and architecural features, predominantly flooring.

The techniques of marquetry and parquetry date back at least to the Classical civilisations, with the use of these techniques evident in works found in the ancient Roman ruins at Pompeii and Herculaneum.

After a decline in their use during the Middle Ages, marquetry and parquetry were revived during the 16th Century in Italy and became exceptionally popular throughout Europe during the Early Modern period. They have flourished in furniture design and interiors ever since.

What is the difference between marquetry and parquetry?

Marquetry and parquetry are techniques employed to create flat ornamental designs in wood, with the main difference being what is depicted in these decorative features. 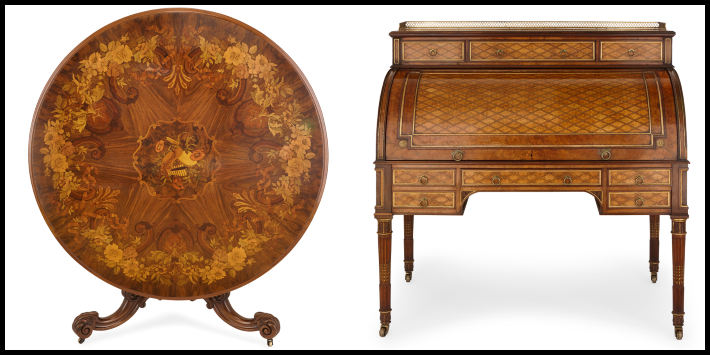 Marquetry is often described as 'painting in wood' and the pictures can depict anything from still life arrangements to figural compositions. Given the intricate and non-uniform nature of marquetry works, these are are most often used in smaller works or as a focal point within a larger overall composition.

Converseley, the geometric, repeating patterns created by parquetry have a simpler, more linear design, which is easier to employ across a larger area or in architectural features, such as wood panelling or flooring.

The word marquetry comes from the French word marquetery which translates as ‘to variegate’, and refers to the appearance of something that is enhanced by the use and contrast of different colours.

Marquetry relies on using many kinds of wood that have different, contrasting colours laid next to each other to create a composition.

Parquetry is often created with just one or two types of wood, and often relies more on contrasting the grains of the wood rather than the colours. However, some of the very finest parquetry can include many types of wood in different colours with different grains.

Often, materials other than wood are incorporated into marquetry compositions. Mother-of-pearl, ivory and bone are all common in more intricate and expensive works, and the detail and size of the design denotes how special and expensive the work is.

One of the most famous types of marquetry is Boulle marquetry which is named after its inventor, André-Charles Boulle, who was cabinetmaker to King Louis XIV of France. Boulle marquetry involves very specific scrolling arabesque forms, and is not crafted in wood, but in tortoiseshell and brass or ormolu. You can read more about Boulle marquetry in our blog post.

How is marquetry created?

There are several techniques used to create marquetry, but all of them start with a design for a composition on paper which is ultimately translated into a wooden veneer.

It is easy to imagine that marquetry is a lot like sculpting, crafting intricate designs into a very hard surface that requires a great deal of manipulation. However, the veneer required for marquetry is exceptionally thin, like a wooden paper, and can easily be scored into shape.

To begin, the marqueteur who completes the process considers which parts of the composition will be made of which different types of wood, and arranges the motifs so that they can are contrasting.

The design for the composition is firstly either traced or stuck onto the different colours of veneer, and is then cut out with a knife blade. Being so thin, veneer is very brittle and dry, and so care must be taken by the marqueteur around especially delicate sections.

Holes, or windows, in the shape of the design are left in the sheet of veneer when the entire composition has been cut out, which can now be filled with a veneer of a contrasting colour and glued into place.

Marquetry compositions are fragile, even when glued together, and so must be affixed onto a more sturdy surface with glue. They are often stuck onto a piece of furniture or a wooden panel that serves as a canvas.

The marquetry compositions are then varnished to protect the woodwork, and to give the veneer a shine. The varnish also accentuates the colours of the marquetry panel, allowing them to stand out against each other.

Marquetry is labour intensive and requires a high level of craftsmanship to complete, and this is why it has long been considered one of the most important woodwork techniques.

What is marquetry used for?

Marquetry is used for many purposes in furniture and the decorative arts. Many pieces of furniture feature inlaid marquetry sections, although some of the very finest pieces are almost entirely veneered with marquetry.Traditionally, the more marquetry that is incorporated into a piece and the better it is executed, the more valuable and often the more collectible it is. 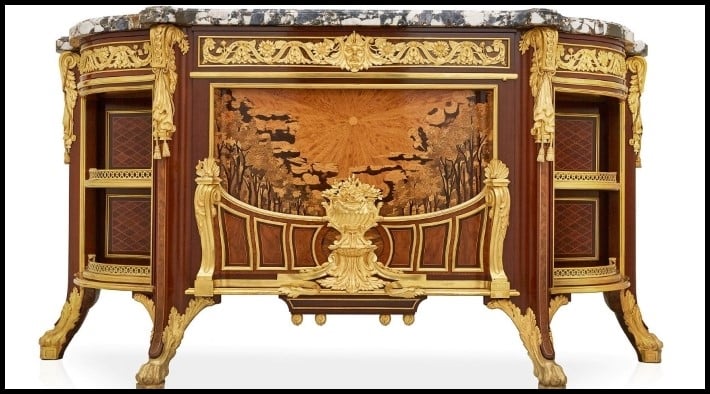 This console table by Francois Linke features a huge and intricate marquetry panel at the front depicting a sun beaming over a landscape, and is even surrounded by further panels of parquetry. © Mayfair Gallery.

In early modern times, marquetry was also a status symbol, because it enhanced and ornamented even very simple furniture structures. It could be used to show off its owners wealth, by being able to afford such luxurious and exotic woods, and by being able to pay the most highly skilled craftsmen to create art with them.

Furthermore, it became common for marquetry to be the method in which many monograms were set into pieces of furniture.  For example, the famous cabinetmaker, or ébeniste,Jean-Henri Riesener, made furniture for Queen Marie Antoinette of France, he often included her intertwined initials into marquetry compositions on her furniture.

Marquetry is also used to create purely decorative panels that can be framed and hung like a painting. The complexity of these decorative panels is reliant on the skill of the marqueteur, and their eye for design. 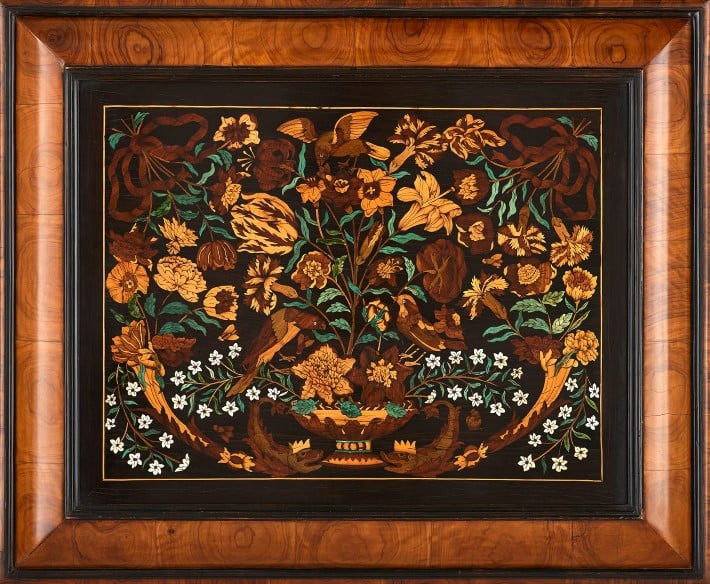 This French antique marquetry panel is crafted in exotic woods which have been tinted in places with additional pigment, and shows just how colourful and intricate the craft can be. © Mayfair Gallery.

The word parquetry, which is often also referred to as ‘parquet’ comes from the old French word parchet which means quite literally ‘a small, enclosed space’. This refers to the mosaic effect of small sections that are often created by parquetry, which feature angular and geometric patterns.

Parquetry can be less complicated than marquetry, and often easier to cut because it relies on repeating, linear patterns rather than many intricate and individual shapes and forms.

However, some forms of parquetry – especially those incorporated into the finest pieces of furniture – are just as impressive and skilful as marquetry.

Common designs for parquetry include squares, trompe l’oeil cube forms, lozenges and triangles. One of the most common parquetry styles is the herringbone pattern, which is often used for flooring.

What is parquetry used for?

Parquetry is used most widely for flooring, and it originated in the 17th Century under the rule of King Louis XIV of France, who sought to renovate and expand the huge palace of Versailles.

Originally, the floors at Versailles were made of marble which required constant washing, and the water would seep through joining points in the floor and began to rot the wooden joists and supports beneath.

Wooden flooring that could be mopped or swept was a suitable alternative, except that mere wooden floorboards were not decadent enough to furnish the home of King Louis XIV.

To provide a more decorative finish, the principles of marquetry were applied to the idea of floorboards to create large, diagonal squares which, depending on the grain of the wood, would create a geometric pattern across the floor in wooden ‘tiles’. The style used by Louis XIV became known as parquet de Versailles and creates a plait-like pattern.

'Parquet Versailles' crafted for King Louis XIV at the Palace of Versailles in the late 16th Century. It is a testimony to the good quality and hard-wearing characteristics of parquetry that it is still in such excellent condition. © Trizek via Wikimedia Commons.

Parquetry is expensive, and following on from Versailles it began to be used to decorate the floors of the homes of the elite. In the 20th Century, new means to create parquetry at lower cost and effort mean that is has flourished into a widely used decorative choice for many modern interiors today.

Parquetry is also used for basketball courts, originally in the USA and now internationally. The earliest known use of parquetry for a basketball court was in 1946 for the Celtics’ home of Boston Arena.

The parquetry court of the Brooklyn Nets basketball team at their home arena the Barclays Centre. The court features a 'herringbone' pattern which is clearly visible from high up in the stands. © David Jones via Flickr.

Parquetry has been widely used for basketball courts ever since, for instance the New York based team the Brooklyn Nets commissioned a new herringbone parquetry floor for their home court in 2012.

Since the true meaning of parquetry is that it incorporates a geometric pattern, parquetry often adorns furniture alongside marquetry, offering a contrast between composition and pattern.

The front of this roll-top desk by Linke (after an 18th Century model made for Marie Antoinette by Riesener) shows a central marquetry design of flowers, which is framed in ormolu and surrounded by lozenge parquetry patterns. © Mayfair Gallery.

How is parquetry created?

Parquetry for furniture panels, which is almost as fine and intricate as marquetry, is created using the same technique.

However, the technique for parquetry flooring is quite different.

Firstly, the area must be prepared with a flat, clean surface. Today, modern plywood is used as a base surface on which the parquetry is laid, but previously it was a painstaking task for ‘floor scrapers’ to ensure that the floor surface was absolutely smooth with no bumps or cracks.

By the 19th Century, parquetry was very popular in Europe, and this painting of 1875 by Gustave Caillebotte shows 'floor scrapers' engaged in the arduous task of preparing a floor for the parquetry veneer. © Wikimedia Commons.

Then, the parquetry tiles, or sometimes blocks, are glued down to the floor in a pattern that offers the greatest contrast to their grains.

The floor is then sanded again and finished with a glossy lacquer which protects the wood and any corners of the tiles or blocks.

Marquetry and parquetry in the modern age

Both marquetry and parquetry continue to be enjoyed up until the present day, and they both exude a timeless charm and character that is so well-associated with woodwork and craftsmanship.

Whilst, in many cases, the style in which marquetry is designed has changed, its techniques have been adapted to incorporate modern technological advances. Silas Kopf, an American carpenter specialising in marquetry, uses modern technologies such as laser cutting in his craft.

This side table by Silas Kopf features a trompe l'oeil pencil and sheet of paper in marquetry against a parquetry background. This incredible piece is aided by modern techniques but focusses on traditional craftwork in the creation of this unique and charming work.© Wikimedia Commons.

Parquetry is, again, aided by modern machines that scrape and sand floors for us, and yet in many ways it is a timeless, ageless style that is still incorporated into modern interiors with exactly the same appearance it has had since the 17th Century.

With ease of technology, these traditional crafts can be enjoyed by many people of many walks of life, and the artistic freedom that we enjoy today means that their design is limitless.

Whilst we can appreciate the beauty and freedoms of modern marquetry and parquetry, which are often aided by machines, we cannot help but marvel at the true splendour and innovation in antique marquetry and antique parquetry which were made entirely by hand. These pieces are testimony to the possibilities of fine craftsmanship and human innovation, and are truly treasures to behold.