Émile Gallé (1846-1904) was an artisanal French glassmaker, who is considered to be one of the founding forces in the French Art Nouveau movement.

Born and raised in Nancy, Gallé developed an interest in chemistry at school and later learnt the techniques of glass-making in Meisenthal, Germany. Following the Franco-Prussian war (1870-1871), Gallé began working at his father’s glass factory in Nancy. After the uprising of the Paris Commune in 1871, Gallé decided to leave France and travel in Europe. The craftsman immersed himself in the museums of England, Italy and Switzerland and became inspired by the decorative motifs of medieval Europe, Islamic art and the Rococo style of the 17th and 18th  Centuries.

On his travels, Gallé also visited a multitude of famous European gardens, where he became inspired by the fresh colours and forms of the natural world. On his return to France, Gallé began to develop his own decorative techniques, often transcribing natural forms into glass ornamentation. Gallé’s glassmaking career took off when his work received praise at the Paris Exhibition of 1878, after which he started to extensively experiment with forms and design, expanding his repertoire to earthenware and woodwork.

By the end of the 19th Century, Gallé had achieved international fame, and his style – with its emphasis on naturalism and floral motifs – was at the forefront of the emerging French Art Nouveau movement. In 1901, Gallé founded l’École de Nancy with Antonin Daum, Louis Majorelle and Eugene Vallin, with the aim of promoting regional crafts and the school soon gained momentum in the movement of Art Nouveau.

Gallé died of Leukaemia in 1904. His wife, Henriette, and his faithful collaborator, Victor Prouvé, endeavoured to maintain the factories and continue Gallé’s work with the support of extant employees, glassmakers, designers, sculptors and engravers. Today, many of Gallé’s works are housed at the Musée de l’École de Nancy. 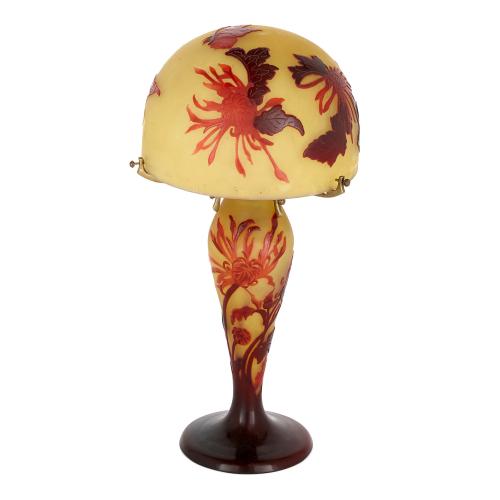 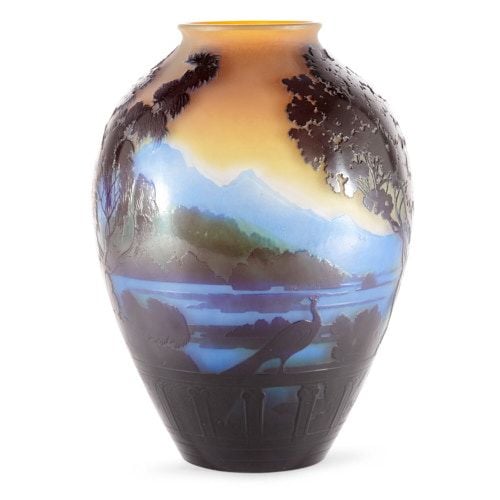