Francois Boucher was one of the most important and celebrated French painters, draughtsmen and designer of theatre and tapestry of the 18th Century, although he is best known for his paintings in the Rococo style. He was so well known, even during his time, that he was described in the renowned writing of the Goncourt brothers as ‘one of those men who represent the taste of a century, who express, personify and embody it.’

Boucher was the son of Nicolas Boucher, a lesser-known painter, from who he received his early training. After admiring one of his paintings the artist Francois Lemoyne (1688-1737), who was First Painter of King Louis XV, took the seventeen-year-old Boucher on as an apprentice. After three months he left, going on to work for an engraver.

Boucher went on to win the prestigious award the Grand Prix de Rome in 1720, and subsequently completing further training in Italy. He was admitted to the Royal Academy of Painting and Sculpture in Paris in 1731. Within the Academy he was promoted to Professor then Rector, and then made an inspector at the prestigious tapestry factory Royal Gobelins Manufactory, eventually becoming First Painter of the King in 1765.

Some of his other most famous subjects in painting include a portrait of his patron, Madame de Pompadour (1756), and lightly treated mythological subjects with a focus on the female nude, such as The Toilet of Venus (1751) and Diana Leaving the Bath (1742).

Boucher was an extensive and varied draughtsman, making prolific drawings that served as both preparatory studies for paintings and prints, and as collectors items in themselves. Alongside painting and drawing, Boucher was also the designer of many theatre sets and costumes, working often with the Opera and for court festivities within the King’s household.

Throughout his oeuvre it is clear to see Boucher’s distinct style and how it came to epitomize the taste of 18th Century France. His style favoured delicate colours, gently modelled forms, light, whimsical subject matter and, in particular, a graceful and yet nubile rendering of the female nude.

Around the time of his death in 1770, the taste for Rococo painting was waning in favour of ancient history painting most commonly favoured during the succeeding Neoclassical period. However, Boucher’s masterpieces became highly sought after by collectors, and now reside in many prestigious museums and galleries worldwide. 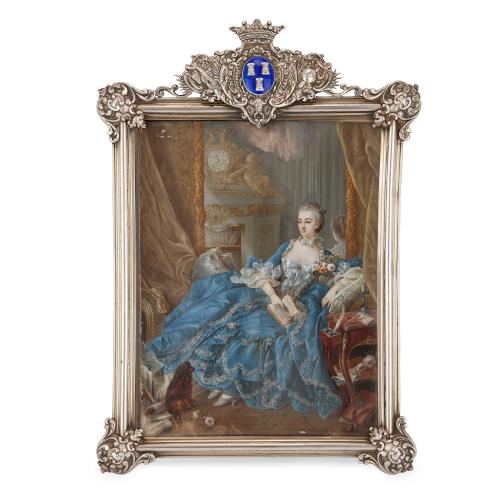 Portrait miniature of the Marquise de Pompadour after Boucher
£8,500