Joseph-Emmanuel Zwiener (b. 1849) was a preeminent cabinetmaker (ébéniste) of German descent, who became one of the most famous furniture makers in late 19th Century Europe. Zwiener specialised in reproducing the designs of Louis XV pieces from public collections, which he then adapted with his own innovative interpretation of the traditional Rococo style.

In 1880, Zwiener established his workshop in Paris where he worked until his return to Germany in 1895. Zwiener quickly earnt a reputation for producing exceptionally fine furniture, and his pieces were acquired by a host of 19th Century European aristocrats and royals. Notably, in 1884, Zwiener’s interpretation of the famous Bureau de Roi was purchased by King Ludwig II of Bavaria.

Zwiener owed part of his success to his collaboration of the brilliantly talented French sculptor Leon Messagé, who worked at Zwiener’s Parisian workshop. When Zwiener exhibited his wares at the 1889 Exposition Universelle in Paris, his works were met with critical acclaim and he received the Gold Medal for his stand, which included an exceptional cabinet designed by Messagé.

In 1895, Zwiener was summoned to Berlin at the request of German Emperor Wilhelm II. The Emperor, keen to promote German artisanal talent for the decoration of his palaces, gave Zwiener an extensive commission to design and produce a suite of furniture. The suite was later exhibited as part of the German Pavillion in the 1900 Exposition Universelle in Paris.

On his return to Germany in 1895, Zwiener’s Parisian workshop was taken over by the famous ébéniste, François Linke. Zwiener's exceptional craftsmanship and extensive use of fine gilt-bronze is similar to Linke’s work. Before assuming control of the workshop, Linke is likely to have worked there. He continued to employ Messagé after Zwiener's departure, offering possible explanation as to the similarities between the works of Linke and Zwiener. 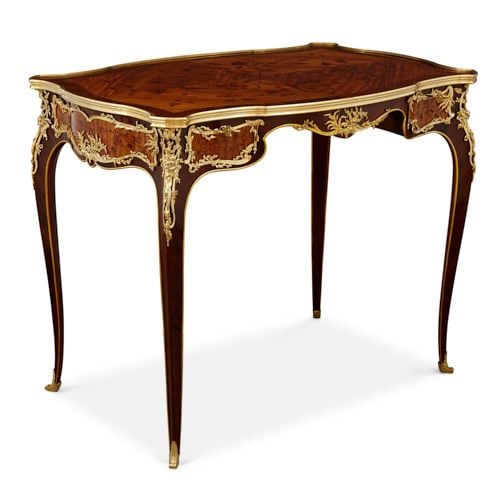