The Pre-Raphaelite Brotherhood was a secret society of young artists and intellectuals that was founded in London in 1848. Their name referred to their opposition to the Royal Academy's praise of the Renaissance and especially of the master painter, Raphael.

Their style, inspired by art critic John Ruskin's theories, focus on a keen observation of the natural world, which they tried to depict with a heightened degree of realism. The Pre-Raphaelite works often depicted subject matter related to literature, religion, love, death and the abstract theories of purity and corruption.

The preeminent artists among the Pre-Raphaelites were Dante Gabriel Rossetti (Italian, 1828-1882), William Holman Hunt (1827-1910), Edward Burne-Jones (1833-1898) and John Everett Millais (1829-1896). These artists specialised in portraying a romanticised vision of the medieval period through archaising compositions and the absence of shadows; techniques that were strongly criticised at the time. A further characteristic trope of Pre-Raphaelite work is the inclusion of a femme-fatale female figure, who is both beautiful and terrifying.

Although the group dissolved in the early 1850s, Pre-Raphaelitism as a style survived and the group's ideas and designs becmae extremely influential in the late Victorian era, having a profound impact on the Symbolist, Art Nouveau and Aesthetic artistic movements. Burne-Jones and Rossetti in particular are often associated with William Morris and his ideas regarding decorative art, which developed further in the Arts & Crafts movement. 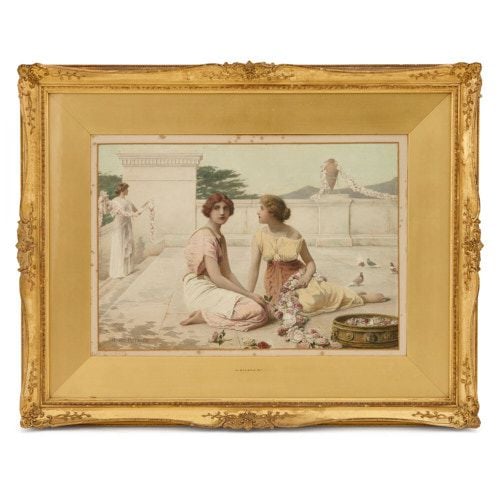